Observer Park gives residents the ability to enjoy the perks of New York from the perspective of a tree-lined street across the Hudson River. Its 115 units receive an average of 150 packages a week, with that number climbing higher during peak delivery times. With only a small office to store and sort deliveries, the community’s two-person leasing staff dealt with space constraints for package storage and spent too many staff hours receiving, logging, storing, and retrieving packages.

The residents, principally working professionals who commute daily to the city, grew increasingly frustrated by the inconvenient package delivery process. Leasing staff tested many strategies to ease the last mile of delivery, including an unstaffed package room, an outsourced part-time concierge professional, and a full-time employee to alleviate the administrative burden of handling packages. However, leaving packages unattended wasn’t a secure option and manual package management limited pick-up times to office hours, preventing many residents from receiving their packages before the office closed! For Observer Park’s leasing team, Package Concierge has practically eliminated the distraction of package management and has resulted in more time for daily responsibilities. Team members have saved an average of 90 minutes per day and are now spending this time planning community events, following up with prospective renters and improving the daily operations of the property.

Residents don’t have to rush home on a crowded train to make sure their packages aren’t sitting in the lobby or left outside the building, leading to increased satisfaction and fewer complaints. Every resident at Observer Park uses an automatic key fob to enter the building, and the exact same fob is used to collect packages from the Package Concierge system, further adding to the system’s convenience and security.

Automated delivery lockers from Package Concierge are helping to increase current residents’ renewal rates at Observer Park, as well as incoming tour requests and leases signed by new prospects. On multiple occasions, prospective residents have extended their initial visits to the building in order to see the process when a package is delivered or picked up. Observer Park includes Package Concierge in each unit’s amenity fee, allowing the community to recover the initial cost of the system.

"Package Concierge is a definite plus, and it helps us stand out. Residents love knowing their deliveries have arrived safely, and that they can retrieve packages at the times most convenient for them. Prospective and current residents find great value in the system, giving it an important role in renewal decisions and new leases." Residents were frustrated with tight office hours for package pick up and the delivery carriers found it difficult to satisfy customers.
Read Case Study During lease-up, the management knew they needed a solution to manage packages. Packages were piling up and cluttering the entryway and leasing office.
Read Case Study

Initially, the management team looked into a package logging application, but determined it would require too much time and still not address the security issue.
Read Case Study This newly constructed apartment building has high student occupancy and no full-time management staff. From the get-go, they knew package management would be a challenge.
Read Case Study With only a small office to store and sort deliveries, the community’s two-person leasing staff dealt with space constraints for package storage and spent too many staff hours managing packages.
Read Case Study 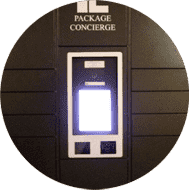 With well over 600 Residents, this property was challenged by the escalating number of packages received every week.
Read Case Study 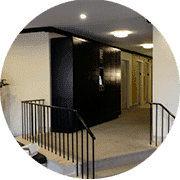 All packages were managed in a break room next to the leasing office, creating a limited window of time for resident pick-up. The constant flow of deliveries and pick-ups caused the staff to stop work every few minutes to deal with packages.
Read Case Study

The luxury apartment community was becoming overwhelmed with the 65-70 packages they were receiving daily. They needed to find the best solution to serve their residents and ease the package management burden for the Canvas LA staff.
Read Case Study