Our Key Takeaways from the 2020 NMHC Annual Events

This year’s National Multifamily Housing Council (NMHC) events were hosted in Orlando at the Hilton Bonnet Creek during the week of Jan 20, 2020, and as evident by the hard to navigate hallways, attendance was stronger than ever (in fact rumor had it that over 1,500 attendees registered on-site increasing expected attendance up over 10,000!) Comprised of three main events: The Women’s Event, the Apartment Strategies Outlook Conference, and the Annual Meeting, there was tremendous conversations, presentations, learnings, and of course a little bit of fun.

One of our favorite highlights was the former Chair and CEO of Pepsi Co, Indra Nooyl. Her delightful interview with new NMHC Board of Director Chairman, David Schwartz, had the audience fully engaged as her thought-provoking stories and antidotes also made us laugh. She gently called out the inevitable gender walls she hit throughout her career as well as the importance of the strength and support of family. She encouraged the multifamily industry to note the caregiver shortage in the US, whether for small children or aging parents, and urged developers to incorporate accommodation for multi-generational living within their properties.

This eventual shift in resident make-up was also acknowledged during the developer session where surprise was expressed by more than one panelist on what they were seeing within their own developments. It seems that the larger three-bedroom units they originally included to accommodate multiple roommates were actually being utilized by empty-nesters looking to host their extended family instead. These larger units are also providing more revenue due to longer lease periods than their smaller studio unit counterparts whose renters seemed to transition more frequently due to concession hopping. Conversations we had with Property Owners after this session echoed the move to older residents as they emphasized the shift was also due to taxation and homeownership burdens.

More than once throughout the events, the $3.4 trillion industry was also called upon to consider sustainability and resiliency. It was noted that if every multifamily property were to do one small thing toward conserving resources, we could collectively make a significant impact. The need to consider climate, especially rising sea levels, should be taken into account when considering new development. The climate session provided strong factual information from Janice Barnes of Climate Adaption Partners and real-world examples from the Chief Resilience Officer in Miami-Dade FL, James Murley, both of whom presented strong cases for looking beyond the site planning.

In addition to these highlights, we also noted three common themes used throughout the events:

Extreme Optimism! We could have made a drinking game with how often the word “bullish” was used throughout all the different sessions. The economist report even went so far as to say this was the best that they have ever seen the marketplace and that the tailwinds continue to propel it forward. This was due in part to the prolific availability and discipline of debt liquidity, high absorption rates for existing inventory, and the expanding investor base – especially globally. Conversations we had with property owners throughout the events echoed this optimism as they shared that they are experiencing their highest occupancy rates ever and are looking forward to a strong year ahead.

Flexible leasing models. Highlighted in several sessions, much discussion was had on the evolving leasing model to now consider short-term rentals, purpose-built co-living, workforce housing and/or home sharing. By creating a more blended model, properties can increase their occupancy rate, especially during the important lease-up timeframe. Whereas discussions may have previously centered around sub-leasing, it has now turned to co-living and everyone is attempting to figure out what that means. Long-term residents have been wary, but provided research found that as long as this new model is professionally managed and communicated, resident’s concerns are alleviated.

Embrace Technology. Whether it is smart-home amenities, self-guided tours, package management, or artificial intelligence (AI) chatbots, the consensus is that automation is the key to driving down costs. Many panelists stressed that the multifamily industry is at least 10-years behind other industries in their adaptation of technology, and that this new technology is not designed to remove employee positions, but rather enhance them. As one panelist adeptly noted, it is simply taking the most common tasks and performing them in a consistent manner which frees up the employee to help the residents in more meaningful ways. No other investment has a more direct impact to the bottom line than technology and as it is now an expectation from educated residents, we should simply look to other industries like hospitality and insurance for execution examples.

There was much to take away from all the NMHC events, but Package Concierge was also honored to help contribute to the event, too. Our founder, Georgianna W Oliver, was one of the panelists during the general session discussing the three technology trends revolutionizing our industry. If you missed the session or are interested in furthering the technology discussion – especially how it relates to automating package management and/or how adding self-guided tours can enhance your property, let us know as we’d love to talk with you more!

Not Too Large, Not Too Small—Sizing Automated Package Management Solutions Just Right 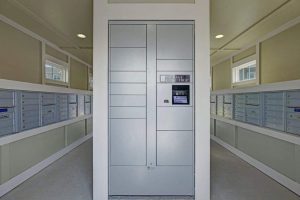